You Are Here: Why energy engineering? 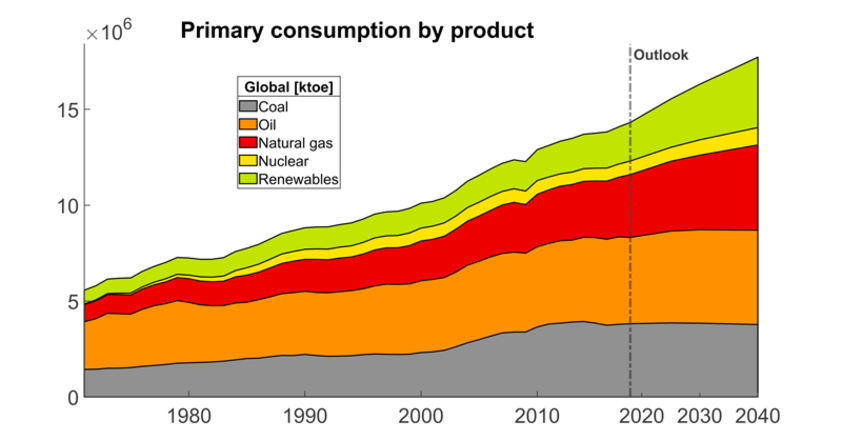 One of the biggest challenges of today's world is the constantly increasing global energy demand and at the same time the increasing scarcity of fossil fuels. For all future social and technological developments this conflict must be taken into account. The worldwide primary energy demand will continue to rise in the future against the background of a further growing world population and the advancing mechanization of the world. (Figure 1) shows a possible forecast for the increase in global primary energy demand. Against this background, a doubling of the energy demand by 2050 is considered realistic. The expected further increase in renewable energies should be emphasized here. 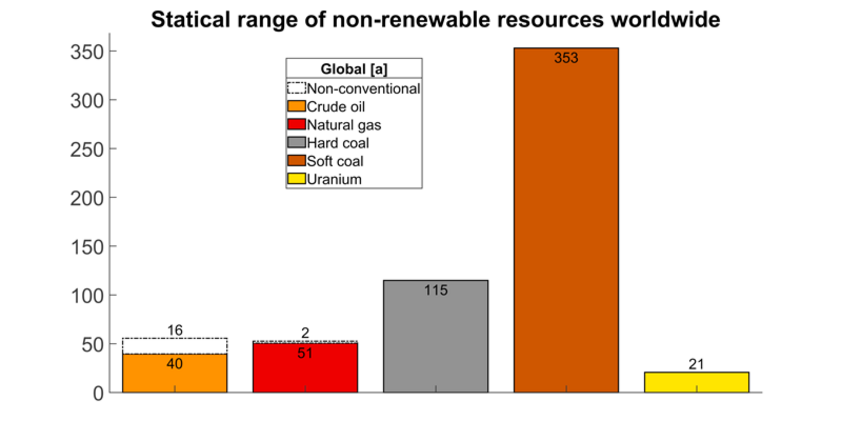 Despite the limited fossil energy sources, the growing energy demand must be covered. As shown in (Figure 2), the existing reserves will last for several decades at current consumption levels. However, an exact estimate based on the reserves and known resources is hard to establish, as future raw material prices and technologies will determine the economic efficiency of extraction and processing. Nevertheless, it is already foreseeable today that conventional energy sources will have to be completely replaced within a few decades. Politically determined framework conditions for achieving emission and climate targets are forcing an early departure from CO2-intensive energy sources.

While the global energy demand will continue to increase in the foreseeable future according to current estimates, (Figure 3) clearly shows that, in the case of the Federal Republic of Germany, continuous technological developments and increased efficiency have already contributed to a reduction in primary energy consumption. 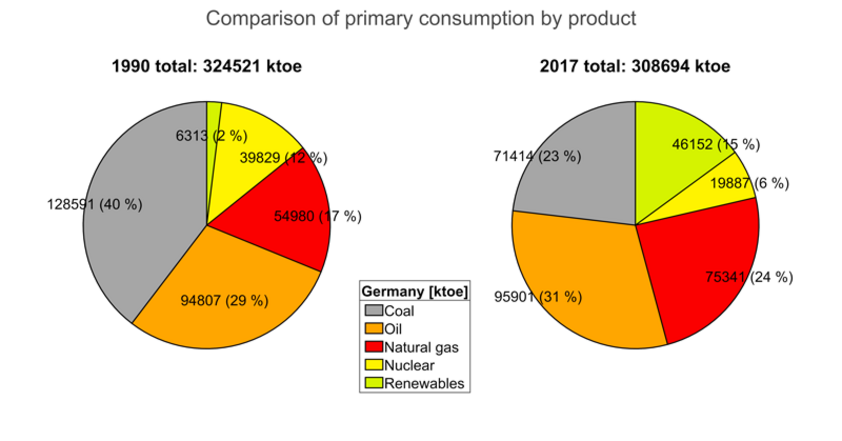 Filgure 3: Shares of primary energy consumption in the Federal Republic of Germany between 1990 and 2019 (Source: Umweltbundesamt)

At the same time, the chart illustrates one of the central challenges that the energy supply sector must face. The proportions of various energy sources contributing to the total energy consumption have changed fundamentally in recent years. While conventional fossil energy sources such as oil, coal and nuclear power are losing importance, there has been a considerable increase in renewable energy forms. 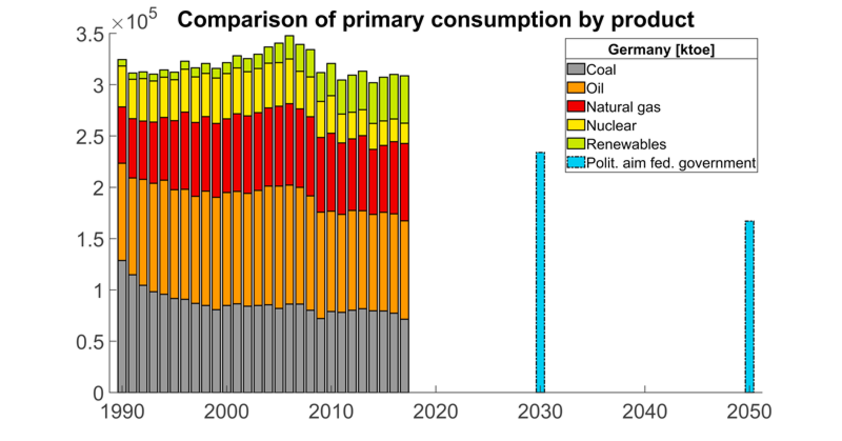 Figure 4: Development of primary energy consumption in the Federal Republic of Germany in accordance with the target (Source: Umweltbundesamt)

In addition to the problems of rising energy demand and dwindling energy resources, especially fossil fuels, aspects of environmental protection are becoming increasingly important. Special attention must be paid to global warming, which is caused by the CO2 produced during the combustion of fossil fuels. In order to achieve the goals already defined today, extensive efforts must be made to develop new methods and energy systems. 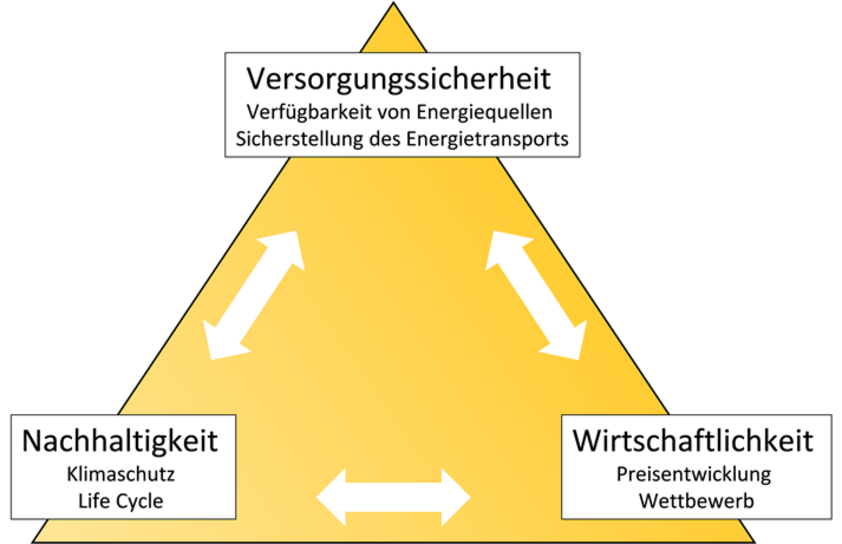 Previous considerations as well as current developments make it clear that there will be considerable challenges and upheavals in the field of energy supply in the coming decades. The intended implementation of the energy system transformation is accompanied by a drastic change in the framework conditions in the energy sector, from which a number of conflicting goals can be derived.

The increasing demand for energy with simultaneously dwindling raw materials imposes three important future tasks on energy technology, which are shown in (Figure 5).

From these tasks, in turn, the objectives of energy technology and thus the goals of the study of energy engineering arise directly. These include the improvement of existing energy conversion processes and the development of new technologies for energy generation and conversion. 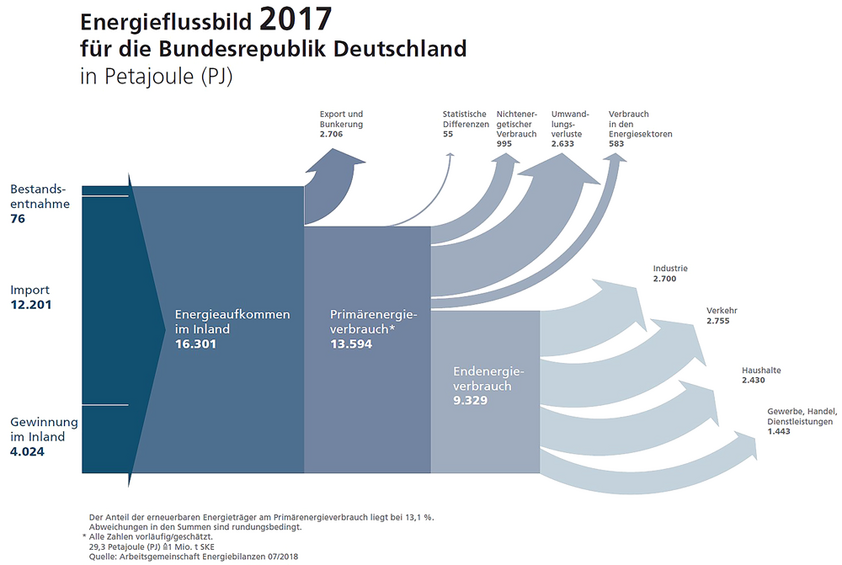 In addition to increasing the efficiency of existing systems, the development of new energy conversion processes is important. This is to be implemented on the basis of renewable energy sources, among other things, in order to be able to provide technically mature and economically justifiable alternatives for resource conservation. This includes the use of solar and wind energy as well as the use of biomass to reduce CO2 emissions.

Since 2007, intensive research has been conducted in the "Tailor-Made Fuels from Biomass" (TMFB) excellence cluster on the production and use of alternative, tailor-made fuels based on biomass. Building on the already promising findings of the first two funding periods, the newly launched Cluster of Excellence "The Fuel Science Center - Adaptive Conversion Systems for Renewable Energy and Carbon Sources" of RWTH Aachen University was established in 2019. This interdisciplinary research approach creates a basis for the integrated conversion of renewable electricity with biomass-based raw materials and CO2 into liquid energy sources with high energy density ("Bio-hybrid Fuels").

In particular, the objective of developing methods and production routes for the generation and use of overall CO2-neutral fuels is being pursued by a research team consisting of natural, engineering and social sciences. 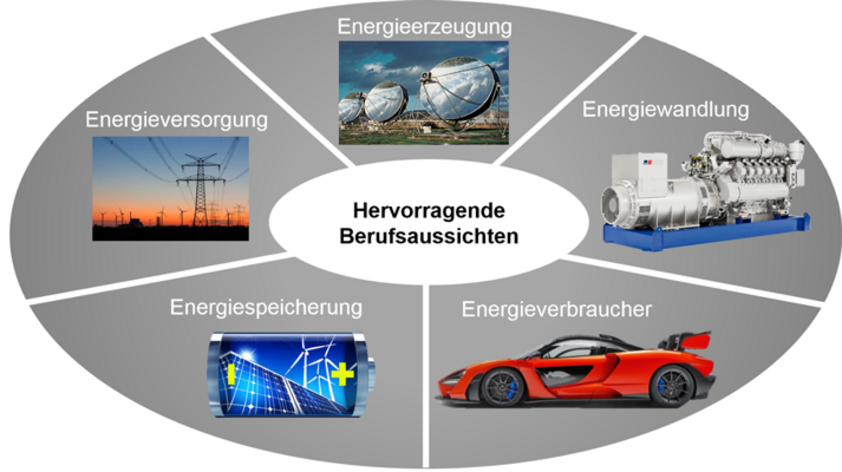 Energy engineering offers an enormous variety of fields of work and thus great potential for future engineers. From the basic supply and the generation and conversion of the energy that is usable for us to energy storage and energy consumers, an extremely wide range of possible research and work areas opens up. This is expressed not only in the large number of institutes, professorships and scientific staff in the field of energy technology, but also in a high level of economic interest and excellent career prospects in the international job market.